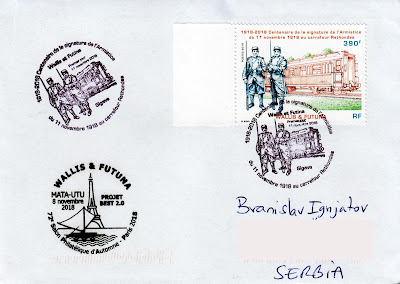 Wallis and Futuna is a French island collectivity in the South Pacific between Tuvalu to the northwest, Fiji to the southwest, Tonga to the southeast, Samoa to the east, and Tokelau to the northeast. Though both French and Polynesian, Wallis and Futuna is distinct from the entity known as French Polynesia. Its land area is 142.42 km2 with a population of 11,558 at the 2018 census. Mata-Utu is the capital and biggest city. The territory is made up of three main volcanic tropical islands along with a number of tiny islets, and is split into two island groups that lie about 260 km apart, namely the Wallis Islands (Uvea) in the northeast, and the Hoorn Islands (also known as the Futuna Islands) in the southwest, including Futuna Island proper and the mostly uninhabited Alofi Island.

Armistice Day is commemorated every year on 11 November to mark the armistice signed between the Allies of World War I and Germany at Compiègne, France at 5:45 am, for the cessation of hostilities on the Western Front of World War I, which took effect at eleven o'clock in the morning—the "eleventh hour of the eleventh day of the eleventh month" of 1918. Except special postmark for this issue, there is also special postmark for Autumn Philatelic exhibition in Paris.


Thank you so much, Eric!

Posted by Branislav Ignjatov at 14:50