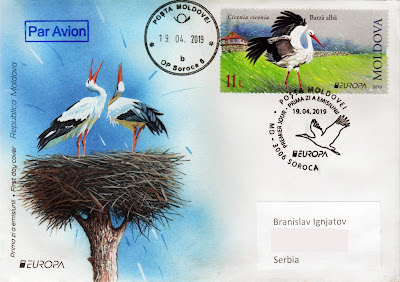 A set of 2 stamps with White Stork (Ciconia ciconia) and Golden Eagle (Aquila chrysaetos) is issued this year for Europa theme by Post of Moldova on 19.4.2019.
The white stork is a large bird in the stork family Ciconiidae. Its plumage is mainly white, with black on its wings. Adults have long red legs and long pointed red beaks, and measure on average 100–115 cm from beak tip to end of tail, with a 155–215 cm wingspan. The white stork is a long-distance migrant, wintering in Africa from tropical Sub-Saharan Africa to as far south as South Africa, or on the Indian subcontinent. When migrating between Europe and Africa, it avoids crossing the Mediterranean Sea and detours via the Levant in the east or the Strait of Gibraltar in the west, because the air thermals on which it depends for soaring do not form over water. 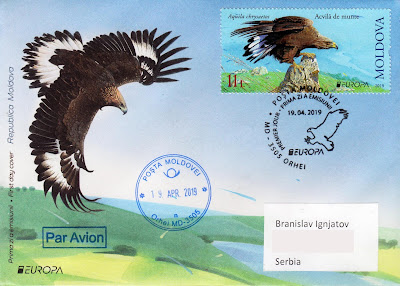 The golden eagle is one of the best-known birds of prey in the Northern Hemisphere. It is the most widely distributed species of eagle. Like all eagles, it belongs to the family Accipitridae. These birds are dark brown, with lighter golden-brown plumage on their napes. Immature eagles of this species typically have white on the tail and often have white markings on the wings. Golden eagles use their agility and speed combined with powerful feet and massive, sharp talons to snatch up a variety of prey, mainly hares, rabbits, and marmots and other ground squirrels. 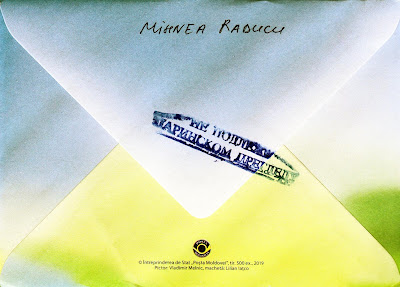 This two covers were sent together, but i received them separately in span of 3 weeks. Some idiot in Serbian post thought this is for Customs and sent one cover to them. When they saw this cover, they postmarked this cover "Not for custom check" and sent back to post.


Thank you so much, Mihnea!

Posted by Branislav Ignjatov at 19:28