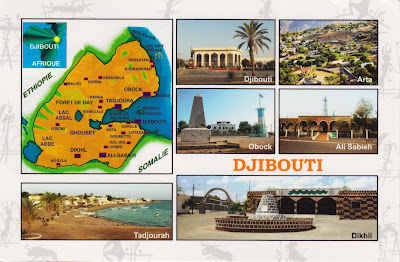 This is my first postcard from Djibouti, small country located in the Horn of Africa. It is bordered by Eritrea in the north, Ethiopia in the west and south, and Somalia in the southeast. The state of Djibouti is predominantly inhabited by two ethnic groups, the Somali and the Afar people. Djibouti is a multi-ethnic nation with a population of over 884,017 inhabitants. French and Arabic are the country's two official languages. About 94% of residents adhere to Islam, which is the official religion and has been predominant in the region for more than a thousand years. 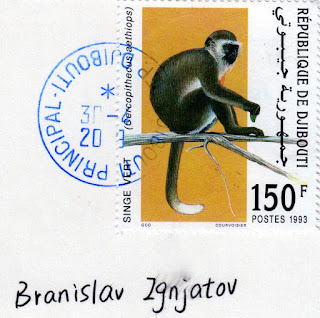 On this fantastic looking stamp you can see grivet (Chlorocebus aethiops), issued on 29.5.1993, and nice blue postmark.

Posted by Branislav Ignjatov at 20:33