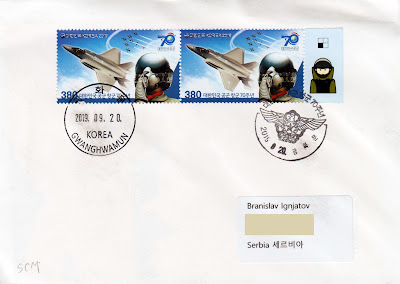 South Korea's Air Force was established on Oct. 1, 1949, with around 1,600 personnel and 20 light aircraft. Upon the outbreak of the Korean War in 1950, the Air Force acquired 10 F-51 Mustang fighter bombers, its first-ever fighter jets, from U.S. forces and carried out operations. Seventy years on, the Air Force has made marked progress and now possesses state-of-the-art weapons systems like F-35A stealth fighters and KC-330 aerial tankers, and it aims to be a leading aerospace power that could rule future warfare, according to officers. South Korean marked 70th anniversary with this beautiful stamp and postmark.

Posted by Branislav Ignjatov at 03:08