Tyrannosaurus rex on cover from US military base 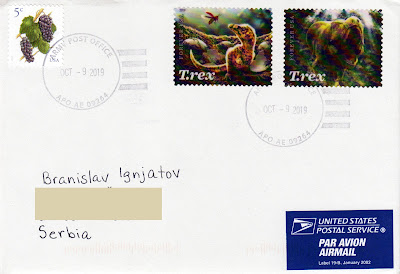 Extinct for some 66 million years, the carnivorous Tyrannosaurus rex dominated the Cretaceous period, which was the tail end of the dinosaur age. With powerful jaws packed in its 4-foot-long skull and banana-sized teeth serrated like steak knives, T. rex easily bit through the flesh and hefty bones of even large dinosaur prey. Its full-grown weight was six to ten tons. Its maximum length was about 40 feet. Although the name “Tyrannosaurus rex” means “tyrant lizard king,” and “dinosaur” means “fearfully great lizard,” they were not lizards at all. Dinosaurs were from a separate reptile lineage, whose closest living relatives are birds and crocodilians.

USPS issued set of four stamps dedicated to Tyrannosaurus rex on 29.8.2019. There's a 3D effect on right stamp, but is not very good, it's hard to see difference. I took two pictures in different angles, but this is the best i can do to show you this effect. Upper picture shows much smaller T-rex head turned to the right, than the bottom one, which is much bigger and clearer. 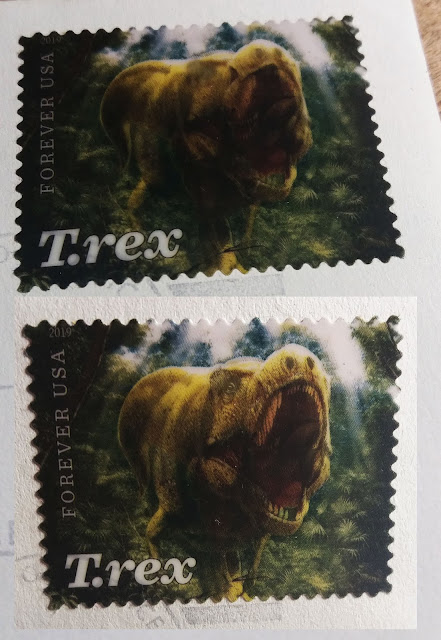 Posted by Branislav Ignjatov at 00:48