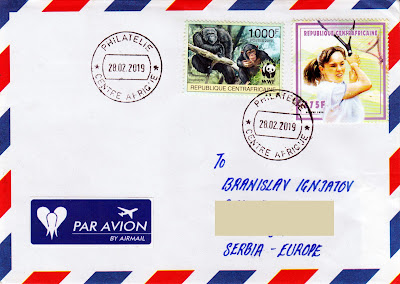 On this cover from Central African Republic you can see on left stamp central chimpanzee or tschego (Pan troglodytes troglodytes). The central chimpanzee occurs in Central Africa, mainly in Gabon, Cameroon, and Republic of the Congo, but also in the Central African Republic, Equatorial Guinea, the Cabinda exclave of Angola, south-east Nigeria, and the coastal extension of the Democratic Republic of the Congo. Its range extends north to the Sanaga River in Cameroon, east to the Ubangi River that defines the border between the two Congos, and south to the Congo River, which defines a large part of the same border. Chimpanzees are found predominantly in tropical moist forests and wet savanna woodlands, as well as the forest-savanna mosaics where these two biomes meet, from sea level to 3,000 metres. They tend to have larger ranges in the forest-savanna mosaics. The average range is 12.5 km2, but can vary from 5 km2 to 400 km2. Second stamp is dedicated to tennis.

Posted by Branislav Ignjatov at 23:30