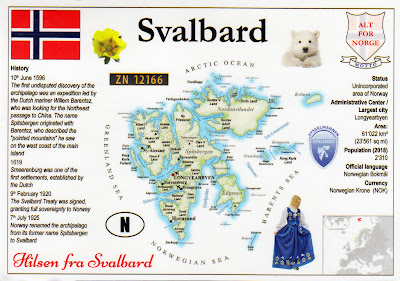 Svalbard is a Norwegian archipelago in the Arctic Ocean. Situated north of mainland Europe, it is about midway between continental Norway and the North Pole. While part of the Kingdom of Norway since 1925, Svalbard is not part of geographical Norway proper; administratively, the archipelago is not part of any Norwegian county, but forms an unincorporated area administered by a governor appointed by the Norwegian government, and a special jurisdiction subject to the Svalbard Treaty that is, unlike Norway proper, outside of the Schengen Area, the Nordic Passport Union and the European Economic Area. Since 2002, Svalbard's main settlement, Longyearbyen, has had an elected local government, somewhat similar to mainland municipalities. Other settlements include the Russian mining community of Barentsburg, the research station of Ny-Ålesund, and the mining outpost of Sveagruva. Ny-Ålesund is the northernmost settlement in the world with a permanent civilian population. 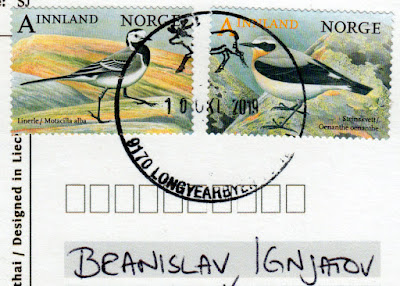 This two beautiful birds on stamps are White Wagtail (Motacilla alba) Northern Wheatear (Oenanthe oenanthe), issued on 3.10.2015. And there is fantastic postmark from main settlement Longyearbyen.


Thank you so much, Rune!

Posted by Branislav Ignjatov at 22:10