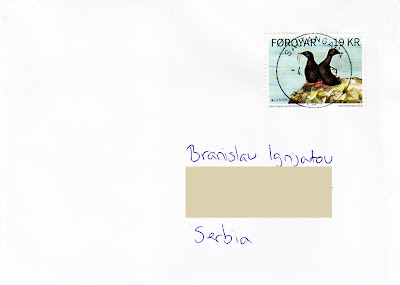 Faroe Islands issued two stamps for this year Europa CEPT theme National birds, both with black guillemot. I received cover with first stamp from set, issued on 29.4.2019. The black guillemot or tystie (Cepphus grylle) is a medium-sized seabird of the alcid family, Alcidae, native throughout northern Atlantic coasts and eastern North American coasts. It is resident in much of its range, but large populations from the high arctic migrate southwards in winter. The bird can be seen in and around its breeding habitat of rocky shores, cliffs and islands in single or smalls groups of pairs. They feed mainly by diving towards the sea floor feeding on fish, crustaceans or other benthic invertebrates. They are listed on the IUCN red list as a species of least concern.

Posted by Branislav Ignjatov at 02:15