Field flowers on cover from Netherlands 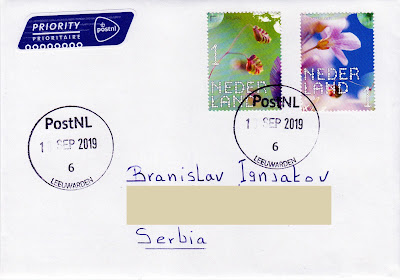 Dutch post issued stamp set dedicated to field flowers on 9.4.2018. On this cover you can see two flowers from set, briza and cuckooflower.

Briza is a genus of annual and perennial plants in the grass family, native to northern temperate regions of Eurasia, North Africa, and certain islands in the Atlantic. The group is generally referred to as the quaking grasses because the flowers and seedheads shake on their stalks in the slightest breeze. Some of its members are grown as ornamental plants.

Cardamine pratensis (cuckooflower, lady's smock, mayflower, or milkmaids), is a flowering plant in the family Brassicaceae, native throughout most of Europe and Western Asia. The specific name pratensis is Latin for "meadow."

Posted by Branislav Ignjatov at 22:21