Precious Pets on cover from Norway 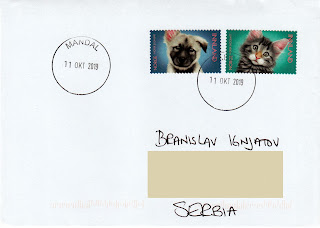 On this lovely cover form Norway you can see stamp set Precious Pets released on 5.10.2019. This two beautiful animals are Norwegian elkhound and Norwegian forest cat, designed by Cecilie Sørgård and printed in 330.000 copies.

The Norwegian Elkhound is one of the Northern Spitz-type breed of dog and is the National Dog of Norway. The Elkhound has served as a hunter, guardian, herder, and defender. It is known for its courage in tracking and hunting moose (or elk) and other large game, such as bears or wolves. The Norwegian Elkhound was first presented at a dog exhibition in Norway in 1877.

The Norwegian Forest cat is a breed of domestic cat originating in Northern Europe. This natural breed is adapted to a very cold climate, with a top coat of glossy, long, water-shedding hairs and a woolly undercoat for insulation. Although this is uncertain, the breed's ancestors may have been a landrace of short-haired cats brought to Norway by the Vikings around 1000 AD, who may also have brought with them long-haired cats, like those ancestral to the modern Siberian and Turkish Angora breeds. During World War II, the breed became nearly extinct until efforts by the Norwegian Forest Cat Club helped the breed by creating an official breeding program.

Posted by Branislav Ignjatov at 22:14