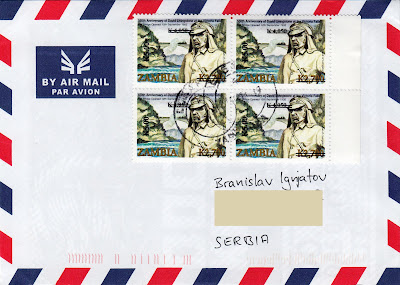 I received my first cover from Zambia, with block of four overprinted stamps dedicated to Anniversary of David Livingstone at the Victoria Falls. This stamps are originally issued in 2006, but they are overprinted together with bunch of other stamps twice! This second overprint is issued on 22.3.2013.

Livingstone became convinced of his mission to reach new peoples in the interior of Africa and introduce them to Christianity, as well as freeing them from slavery. It was this which inspired his explorations. In 1849 and 1851, he traveled across the Kalahari, on the second trip sighting the upper Zambezi River. In 1852, he began a four year expedition to find a route from the upper Zambezi to the coast. This filled huge gaps in western knowledge of central and southern Africa. In 1855, Livingstone discovered a spectacular waterfall which he named 'Victoria Falls'. He reached the mouth of the Zambezi on the Indian Ocean in May 1856, becoming the first European to cross the width of southern Africa.

Posted by Branislav Ignjatov at 22:45