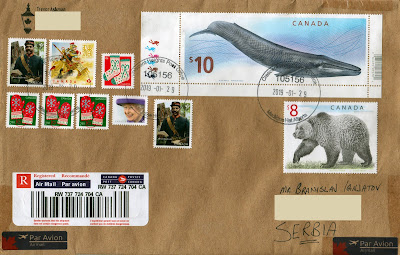 I received last year Canadian registered cover with Blue whale stamp on it, the biggest stamp and highest stamp denomination Canada Post has ever produced. Stamp is part of long running Canadian Wildlife series and this one is issued on 4.10.2010.

Size, power and speed, the majestic blue whale (Balænoptera musculus), king of the animal kingdom, has it all. Weighing in at between 80 and 180 metric tonnes and reaching lengths of more than 30 m, our planet has never—even in the age of dinosaurs—seen another creature this big. It can travel at speeds of 33 km/hr, accelerating to 48 km/hr when chased, making it among the fastest whale species. This fascinating giant of the deep is also unmatched in the projection of its voice, emitting low-frequency sounds that can travel hundreds of kilometers (and possibly entire oceans) under water.

There is also one more stamp from Canadian Wildlife series on this cover among other stamps. This is Grizzly Bear (Ursus arctos horribilis), issued on 15.10.1997, and this stamp is first one in this series.


Thanks a lot, Trevor!

Posted by Branislav Ignjatov at 23:24