Military Working Dogs on cover sent from US military base 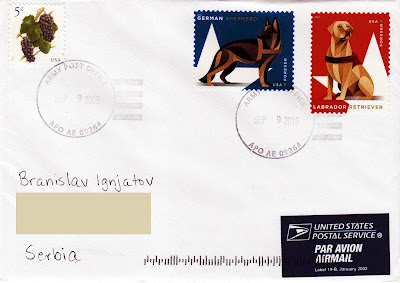 US Post issued stamps set dedicated to military working dogs. On this cover you can see two stamps with German Shepherd and Labrador Retriever.

The Labrador Retriever is a medium-large breed of retriever-gun dog. A favourite disability assistance breed in many countries, Labradors are frequently trained to aid those with blindness or autism, act as a therapy dog, or perform screening and detection work for law enforcement and other official agencies. The breed is best known for their obedience, loyalty, and playful composure. Additionally, they are prized as sporting and hunting dogs.


Posted by Branislav Ignjatov at 20:11