China: The 10th Anniversary of Three Direct Links Across the Taiwan Strait 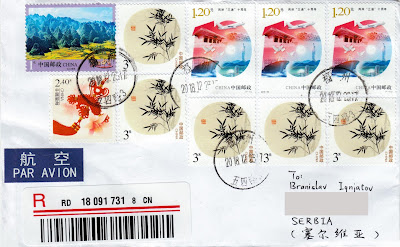 The Three Links was a 1979 proposal from the National People's Congress of the People's Republic of China to open up postal, transportation (especially airline), and trade links between China and Taiwan, with the goal of unifying Mainland China and Taiwan. Before the establishment of the "Three Links", communication between the two sides were routed through intermediate destinations, primarily Hong Kong; Macau; Jeju, South Korea and Ishigaki, Okinawa Prefecture, Japan. The "Three Links" were officially established on 15 December 2008, with the commencement of direct flights, shipping and post.

Posted by Branislav Ignjatov at 00:04