Latvian Birds on cover from Riga 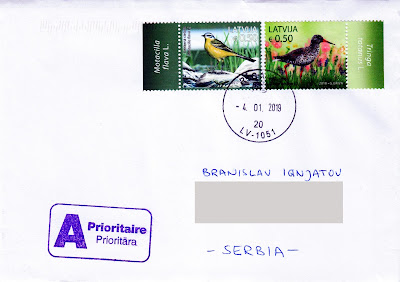 This is cover from Latvia, sent from capital city Riga, with two stamps from two different sets from series Latvian Birds. First one is Western Yellow Wagtail (Motacilla flava), issued on 14.7.2017. The western yellow wagtail (Motacilla flava) is a small passerine in the wagtail family Motacillidae, which also includes the pipits and longclaws. This species breeds in much of temperate Europe and Asia. It is resident in the milder parts of its range, such as western Europe, but northern and eastern populations migrate to Africa and south Asia. Second stamp is Common Redshank (Tringa totanus), issued on 8.6.2018. The common redshank or simply redshank (Tringa totanus) is a Eurasian wader in the large family Scolopacidae. The genus name Tringa is the New Latin name given to the green sandpiper by Aldrovandus in 1599 based on Ancient Greek trungas, a thrush-sized, white-rumped, tail-bobbing wading bird mentioned by Aristotle.

Posted by Branislav Ignjatov at 17:18