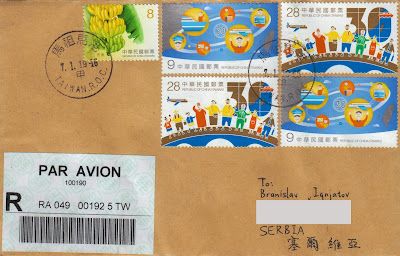 Cross-Strait relations, Mainland–Taiwan relations, or Taiwan–China relations refer to the relationship between the following two political entities, which are separated by the Taiwan Strait in the west Pacific Ocean. Their relationship is complex and controversial due to the dispute on the political status of Taiwan after the administration of Taiwan was transferred from Japan at the end of World War II in 1945 and the subsequent split of China into the above two in 1949 as a result of civil war.
This to stamps set is issued on 20.9.207. to commemorate the 30th Anniversary of Cross-Strait Exchanges. There is also one definitive fruit stamp on left side, issued 18.8.2017.

Posted by Branislav Ignjatov at 20:59