Kites on cover from Canada 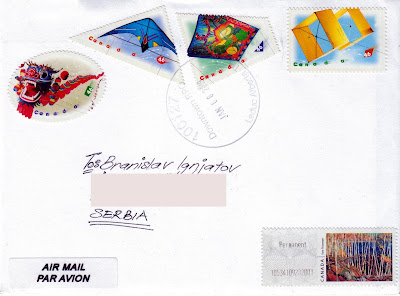 This beautiful set on cover from Canada is Stamp Collecting Month, issued on 1.10.1999. We can see four different types of kites, and kites on stamps are really rare. Through 2000 years of development, kites have taken many forms and have been used for many purposes. Originally flown by the Chinese for military, religious and ceremonial purposes as well as for sport, they were the world's first airborne craft. For many, history's most memorable image of the kite is the moment in 1752 when Benjamin Franklin hung a key from a kite line during a storm to demonstrate the electrical nature of lightning. Many persons have subsequently been killed trying to replicate this experiment. There is also one more stamp Tom Thomson  - Dans le Nord 1915, issued on 31.10.2016.

Posted by Branislav Ignjatov at 00:26