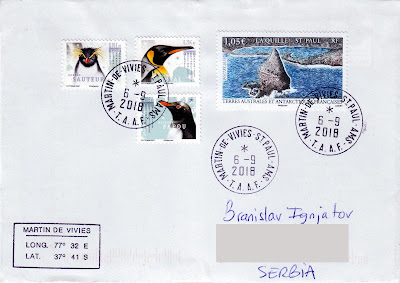 Amsterdam and Saint-Paul are subantarctic volcanic islands in the southern Indian Ocean, located approximately 80 km from each other. Among the most remote islands in the world, Amsterdam and Saint-Paul are more than 3,000 km from any continent, situated between Antarctica, Africa, and Australia. Amsterdam is an island of about 55 km2, with an extinct volcano reaching 911 m altitude. Saint-Paul is a much smaller island, only 7 km2, and reaching an altitude of 272 m. Together with the Crozel and Kerguelen archipelagoes and the Antarctic territory of Terre Adèlie, Saint-Paul and Amsterdam are part of the French Southern and Antarctic Territories, formed in 1955.


Thank you so much, Eric!

Posted by Branislav Ignjatov at 13:23