Cover from Scott Base in Ross Dependency 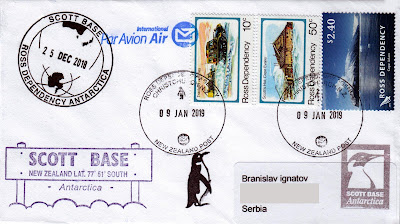 The Ross Dependency is a region of Antarctica defined by a sector originating at the South Pole, passing along longitudes 160° east to 150° west, and terminating at latitude 60° south. It is claimed by New Zealand. The Dependency takes its name from Sir James Clark Ross, who discovered the Ross Sea, and includes part of Victoria Land, and most of the Ross Ice Shelf. Ross Island, Balleny Islands and the small Scott Island also form part of the Dependency, as does the ice-covered Roosevelt Island.

This cover was sent from Scott Base, research facility located at Pram Point on Ross Island near Mount Erebus. The research facility was named in honor of Captain Robert Falcon Scott, leader of two British expeditions to the Ross Sea area of Antarctica. The base was set up as support to field research and the center for research into earth sciences, and now conducts research in many fields, operated by Antarctica New Zealand. By road, the base is 3 kilometers from the larger U.S. McMurdo Station.


Thank you so much, Trevor!


Posted by Branislav Ignjatov at 23:53