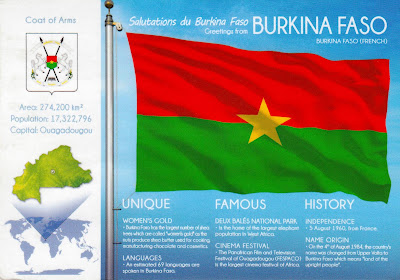 Burkina Faso is a landlocked country in West Africa. It covers an area of around 274,200 square kilometres and is surrounded by six countries: Mali to the north; Niger to the east; Benin to the southeast; Togo and Ghana to the south; and Ivory Coast to the southwest. Its capital is Ouagadougou. In 2014 its population was estimated at just over 17.3 million. Formerly called the Republic of Upper Volta (1958-1984), the country was renamed "Burkina Faso" on 4 August 1984 by then-President Thomas Sankara.


Posted by Branislav Ignjatov at 12:28