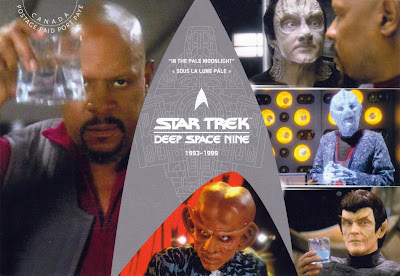 Star Trek: Deep Space Nine is a science fiction television series set in the Star Trek universe in the Milky Way galaxy, in the years 2369–2375. In contrast to other Star Trek TV shows, it primarily takes place on a space station rather than a starship, so as not to have two series with starships in the same time period; the series ran concurrently with Star Trek: The Next Generation during its first two seasons and with Star Trek: Voyager for the remainder of its run. The starship USS Defiant was introduced in season 3, but the Deep Space Nine space station remained the show's primary setting. 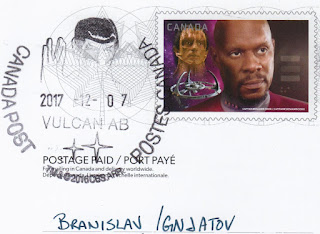 This is another official prepaid postcard by Canada Post, sent from Vulcan in Canada, with Spock on this beautiful special cancellation.


Thank you very much Lars and Trevor!

Posted by Branislav Ignjatov at 18:17