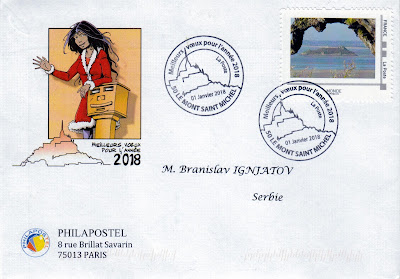 Le Mont Saint-Michel is an island commune in Normandy, France. It is located about one kilometre  off the country's northwestern coast, at the mouth of the Couesnon River near Avranches and is 100 hectares in size. The island has held strategic fortifications since ancient times and since the 8th century AD has been the seat of the monastery from which it draws its name. One of France's most recognizable landmarks, visited by more than 3 million people each year, Mont Saint-Michel and its bay are on the UNESCO list of World Heritage Sites. Over 60 buildings within the commune are protected in France as historical monuments.I received cover from this unique destination with very nice cancellation. This matching stamps is from set Mont Saint-Michel, issued on 10.06.2016.

Posted by Branislav Ignjatov at 14:25