Flags of the World Series: Isle of Man 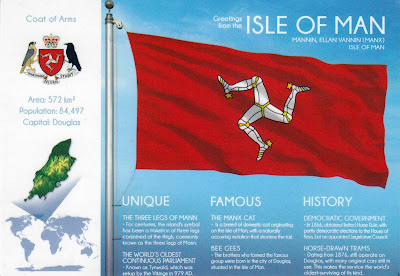 The Isle of Man is a self-governing British Crown dependency in the Irish Sea between the islands of Great Britain and Ireland. The head of state is Queen Elizabeth II, who holds the title of Lord of Mann and is represented by a Lieutenant Governor. The island has been inhabited since before 6500 BC. The Isle of Man parliament, Tynwald, became in 1881 the first national legislative body in the world to give women the right to vote in a general election, but this excluded married women. In 2016, the Isle of Man was the first whole nation to be awarded biosphere reserve status by UNESCO. 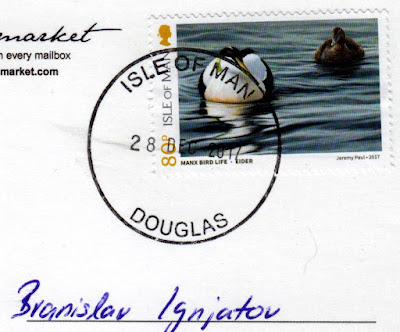 This beautiful stamp on postcard is from set Coastal Birds of the Isle of Man, issued on 29.06.2017.

Posted by Branislav Ignjatov at 20:02

Email ThisBlogThis!Share to TwitterShare to FacebookShare to Pinterest
Labels: Flags of the World Series, Isle of Man, postcard, stamps