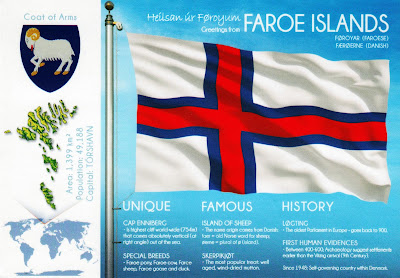 The Faroe Islandsare an archipelago between the Norwegian Sea and the North Atlantic, about halfway between Norway and Iceland, 320 kilometres north-northwest of Scotland. The islands are an autonomous country within the Kingdom of Denmark. Their area is about 1,400 square kilometers with a population of 50,322 in October 2017. The Faroes' terrain is rugged, and the islands have a subpolar oceanic climate: windy, wet, cloudy, and cool. Despite this island group's northerly latitude, temperatures average above freezing throughout the year because of the Gulf Stream.

Posted by Branislav Ignjatov at 13:06