Another cover from Samoa 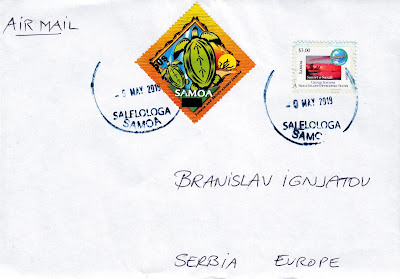 This is my second cover from Samoa, but first with overprinted stamp in many, many years. I don't remember when i last time received mail with overprinted face value. When i was kid, they often overprinted stamps in Yugoslavia. My first Samoan was sent from capital city Apia, but this one is sent from Salelologa, a village district at the east end of Savai'i island in Samoa. It is the main entry point into the island with the only ferry terminal on Savai'i. It also serves as the main township for shopping and public amenities with a market selling fresh produce and arts and crafts.

Stamps on cover:
Overprinted stamp is previously issued on 28.09.2005, as a part of set Legends of Samoa, but i didn't found info when is overprinted.
Second stamp is Sunset at Savaii, from set The 3rd Pacific SIDS Conference - Small Island Developing States, issued on 29.8.2014.

Posted by Branislav Ignjatov at 19:19