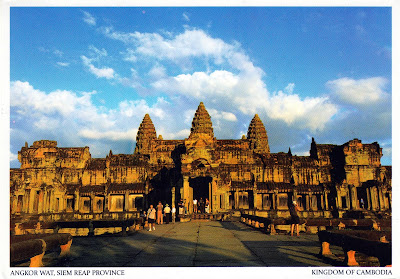 Angkor Wat is a temple complex in Cambodia and the largest religious monument in the world (162.6 hectares). It was originally constructed as a Hindu temple dedicated to the god Vishnu for the Khmer Empire, gradually transforming into a Buddhist temple towards the end of the 12th century. It was built by the Khmer King Suryavarman II in the early 12th century in Yaśodharapura (present-day Angkor), the capital of the Khmer Empire. Breaking from the Shiva tradition of previous kings, Angkor Wat was instead dedicated to Vishnu. As the best-preserved temple at the site, it is the only one to have remained a significant religious center since its foundation. It has become a symbol of Cambodia, and it's appearing on its national flag.

Posted by Branislav Ignjatov at 18:04