Postcard from Aitutaki cancelled on One Foot Island 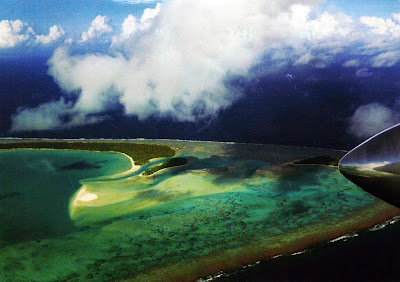 This is my first postcard from Aitutaki, one of the Cook Islands, north of Rarotonga. It has a population of approximately 2,000. Aitutaki is the second most visited island of the Cook Islands. The main village is Arutanga on the west side. Author of this postcard is my friend Wolfgang, who took picture from airplane approaching Aitutaki. 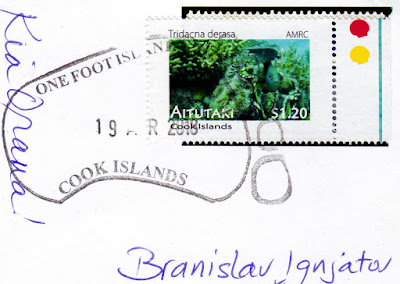 This huge and fantastic cancellation represents Tapuaetai or "One Foot Island", one of 22 islands in the Aitutaki atoll of the Cook Islands. They call it One Foot Island because, from the air,  it resembles a left foot. But there is also legend: A tribe once attacked the main island and a man and his son escaped by canoe to an unnamed islet.  The father carried the boy across the beach and hid him in a tall coconut tree.  Then he paddled all the way to Rarotonga for help.  When the attackers reached the islet they saw only one set of footprints on and off the island and they left.  The boy remained safely hidden until his father returned with help.  And from then on, the islet was known as One Foot Island.

Posted by Branislav Ignjatov at 18:16