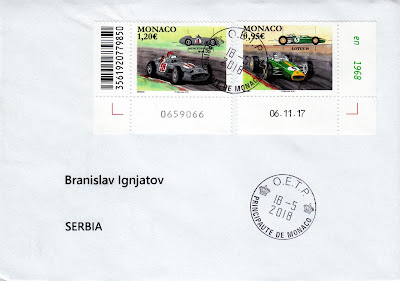 The Mercedes-Benz W196 was a Formula One racing car produced by Mercedes-Benz for the 1954 and 1955 F1 seasons. Successor to the W194, in the hands of Juan Manuel Fangio and Stirling Moss it won 9 of 12 races entered and captured the only two world championships in which it competed. Its crash at Le Mans that year ended not only its own short-lived domination on the WSC circuit but spelled the end also for the W196, as Mercedes pulled out of competitive racing in 1955 and did not return for another three decades.

The Lotus 49 was a Formula One racing car designed by Colin Chapman and Maurice Philippe for the 1967 F1 season. It was designed around the Cosworth DFV engine that would power most of the Formula One grid through the 1970s. Jim Clark won on the car's debut, in 1967, and it would also provide him with the last win of his career, in 1968. Graham Hill went on to win that year's title and the car continued winning races until 1970.


Posted by Branislav Ignjatov at 19:30