Lucie and Raymond Aubrac on FDC from France 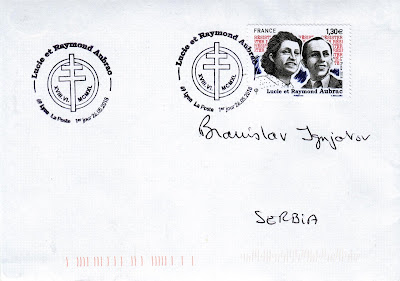 Raymond Aubrac was a leader of the French Resistance during the Second World War. Samuel was serving in the French army as an engineering officer on the Maginot Line at the outbreak of the Second World War. Samuel was taken prisoner by the German army on 21 June 1940, but he managed to escape from the internment camp with the aid of his wife. He and Lucie joined the French Resistance in 1940. In the autumn of 1940, they formed one of the first underground Resistance groups in Lyon. Raymond Aubrac was arrested by the Milice on March 15, 1943 in a routine raid. His captors had no idea whom they had captured. He was eventually released two months later. On June 21, 1943, Aubrac was one of eight senior Resistance leaders  secretly meeting in the Lyon suburb of Caluire when Gestapo officers, under the orders of Klaus Barbie, stormed the place and arrested all the eight leaders. The eight leaders were interrogated and tortured under the direction of Barbie. Aubrac was sentenced to death by a Paris court, but the execution was not quickly carried out because the authorities still hoped to obtain intelligence from him. Lucie Aubrac helped to organise his escape from the prison. She claimed to be his fiancée, saying he was named "Ermelin" (one of his aliases) and that he had been caught in the raid while innocently visiting a doctor. She was told that he was to be executed for resistance, and asked to marry him; a French legal clause allowed engaged people to marry if one of them was soon to die. Later, when he was being brought back to prison after the supposed marriage, he and fifteen other prisoners were rescued by resisters in cars, led by Lucie, who attacked the vehicle he was in.

Posted by Branislav Ignjatov at 00:47