100 years since the WW1 Armistice, on cover from Compiègne, France 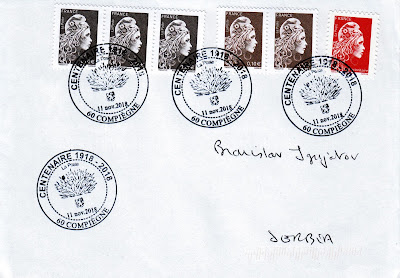 The Armistice of 11 November 1918 was the armistice that ended fighting on land, sea and air in World War I between the Allies and their opponent, Germany. Previous armistices had been agreed with Bulgaria, the Ottoman Empire and the Austro-Hungarian Empire. Also known as the Armistice of Compiègne from the place where it was signed at 5:45 a.m. by the French Marshal Foch, it came into force at 11:00 a.m. Paris time on 11 November 1918 and marked a victory for the Allies and a defeat for Germany, although not formally a surrender. French post celebrated this event with special postmark in Compiègne on that day.

Posted by Branislav Ignjatov at 15:16