Year of the Pig on First day cover from Liechtenstein 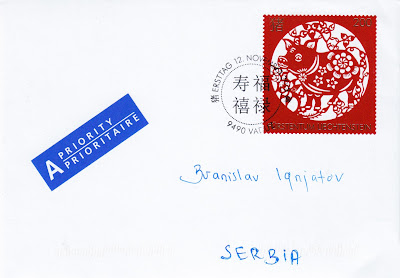 The Pig is the twelfth of all zodiac animals. According to one myth, the Jade Emperor said the order would be decided by the order in which they arrived to his party. Pig was late because he overslept. Another story says that a wolf destroyed his house. He had to rebuild his home before he could set off. When he arrived, he was the last one and could only take twelfth place. In Chinese culture, pigs are the symbol of wealth. Their chubby faces and big ears are signs of fortune as well. Liechtensteinische Post AG is one of many postal operators which issue stamps with Chinese zodiac signs, and they were one first to issue stamps dedicated to Year of the Pig on 12.11.2018.

Posted by Branislav Ignjatov at 14:43