Flags of the World Series: Taiwan 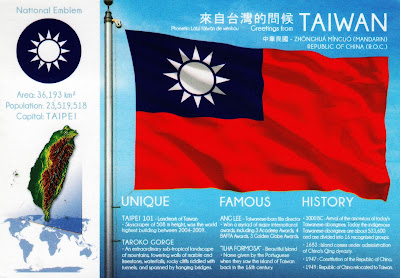 Taiwan, officially the Republic of China, is a state in East Asia. Its neighbors include the People's Republic of China to the west, Japan to the northeast, and the Philippines to the south. It is the most populous state and largest economy that is not a member of the United Nations. The Chinese Civil War led to the ROC's loss of the mainland to the Communists, and the flight of the ROC government to Taiwan in 1949. Although the ROC continued to claim to be the legitimate government of China, its effective jurisdiction had, since the loss of Hainan in 1950, been limited to Taiwan and several small islands, with the main island making up 99% of its de facto territory. As a founding member of the United Nations, the ROC represented China at the UN until 1971, when it lost its seat to the PRC. 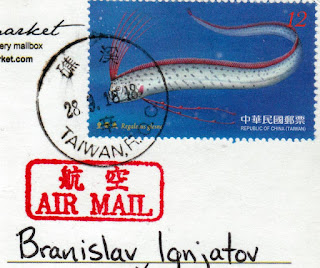 Stamp on postcard is Regalecus glesne (The giant oarfish), from set Deep-Sea Creatures in Taiwan, issued on 12.12.2012.

Posted by Branislav Ignjatov at 21:55