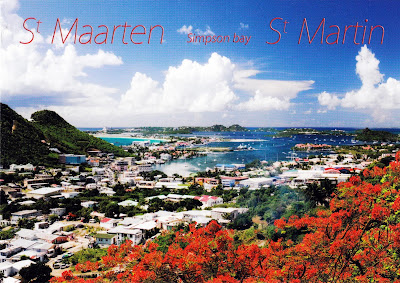 Saint Martin (French: Saint-Martin; Dutch: Sint Maarten) is an island in the northeast Caribbean Sea, approximately 300 km east of Puerto Rico. The 87-square-kilometre island is divided roughly 60/40 between the French Republic (53 km2) and the Kingdom of the Netherlands (34 km2), but the two parts are roughly equal in population. The division dates to 1648. The southern Dutch part comprises Sint Maarten and is one of four constituent countries that form the Kingdom of the Netherlands. The northern French part comprises the Collectivity of Saint Martin and is an overseas collectivity of France. This card is sent from French part of the island, and on card you can see Simpson Bay, which is also divided between two sides. 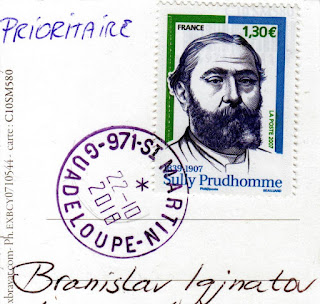 Saint Martin used regular French stamps, unlike Dutch part,witch have their own stamps. Stamp on postcard is The 100th Anniversary of the Death of Sully Prudhomme, issued on 19.9.2007.


Thank you so much Wolfgang!

Posted by Branislav Ignjatov at 21:36