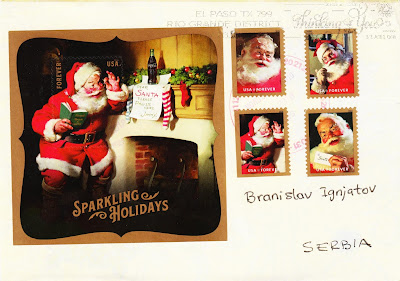 USPS issued four stamps and a souvenir sheet showcasing classic images of Santa Claus painted by famed commercial artist Haddon Sundblom. Each stamp portrays a close-up of Santa’s face. The four images featured in the booklet are details from larger paintings created by Sundblom and originally published in ads for The Coca-Cola Company from the 1940s through the early 1960s. Sundblom is the man credited with refining the modern image of Santa Claus. The souvenir sheet includes a semi-jumbo stamp as part of a wider scene of one of Sundblom's paintings chosen for the Sparkling Holidays stamp booklet. In it, Santa is depicted standing by a fireplace holding a book that lists good boys and girls. Stamps are released on 11.10.2018. 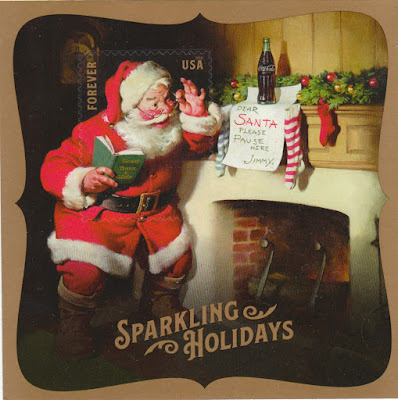 Inside cover was this mint minisheet.


Thank you so much Carlos!

Posted by Branislav Ignjatov at 23:35