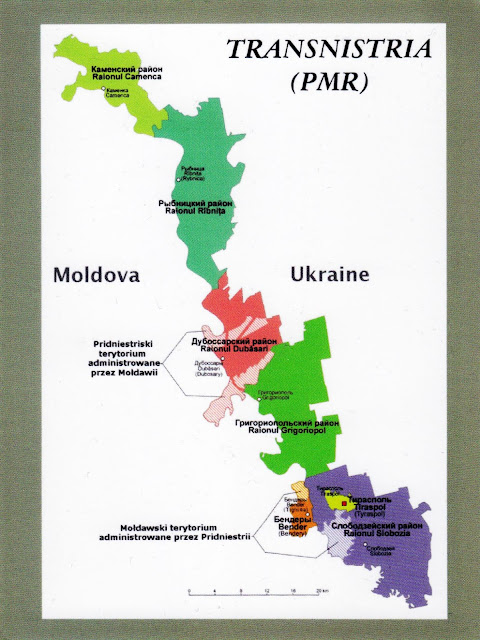 Transnistria, officially the Pridnestrovian Moldavian Republic, is an unrecognised state which split off from Moldova after the dissolution of the USSR and mostly consists of a narrow strip of land between the river Dniester and the territory of Ukraine. Transnistria has been recognised only by three other mostly non-recognised states: Abkhazia, Artsakh, and South Ossetia. The region is considered by the UN to be part of Moldova.

After the dissolution of the USSR, tensions between Moldova and the breakaway Transnistrian territory escalated into a military conflict that started in March 1992 and was concluded by a ceasefire in July of the same year. As part of that agreement, a three-party (Russia, Moldova, Transnistria) Joint Control Commission supervises the security arrangements in the demilitarised zone, comprising twenty localities on both sides of the river. Although the ceasefire has held, the territory's political status remains unresolved: Transnistria is an unrecognised but de facto independent semi-presidential republic with its own government, parliament, military, police, postal system, currency and vehicle registration. Its authorities have adopted a constitution, flag, national anthem and coat of arms. It is the only country still using the hammer and sickle on its flag. 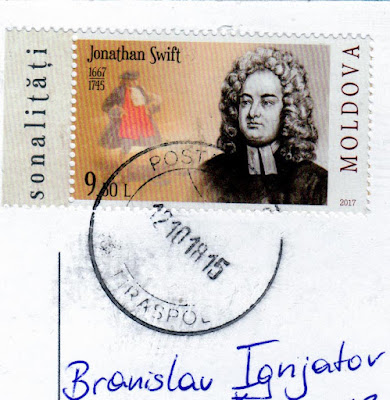 Even though PMR have it's own stamps, all their mail goes through Moldovan postal system, which don't recognize their stamps, so sender user regular Moldovan stamp when he sent this map postcard from Tiraspol, capital of PMR.

Posted by Branislav Ignjatov at 12:17