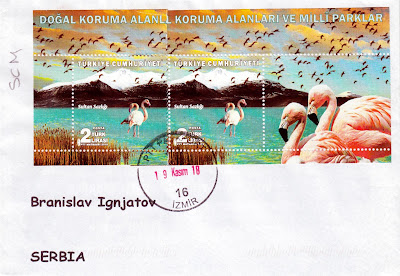 This beautiful Turkish cover is from series Nature Protection, and is dedicated Sultan Reedy National Park, established on March 17, 2006, and it's located in central Turkey. Sultan Reedy National Park  has important freshwater bodies and salt springs. It is one of the rare ecosystems which have both freshwater lakes and salty lakes, and it is also important for nearly extinct bird species which live in the national park. Since Sultan Reedy is on migration routes, and is an important region for these species to take shelter and reproduce, it is included by the Ramsar Convention, which is for protecting the wet lands which are important internationally for water birds. More than 130.000 water birds and 251 different bird species place a particular importance to the national park. This beautiful flamingo minisheet is issued on 26.9.2018.

Posted by Branislav Ignjatov at 00:18