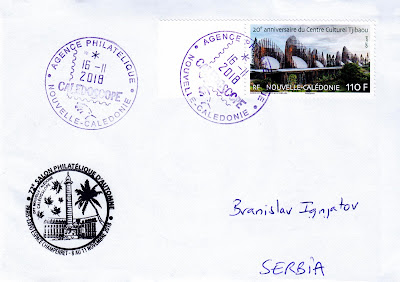 I received my first cover from New Caledonia, a special collectivity of France in the southwest Pacific Ocean, located to the south of Vanuatu, about 1,210 km east of Australia and 20,000 km from Metropolitan France. The archipelago, part of the Melanesia subregion, includes the main island of Grande Terre, the Loyalty Islands, the Chesterfield Islands, the Belep archipelago, the Isle of Pines, and a few remote islets. The capital of the territory is Nouméa.

Cover was sent from 72nd Autumn Philatelic fair in Paris to New Caledonia, and then it's postmarked and sent back to me. Sender used one beautiful stamp The 20th Anniversary of the Jean-Marie Tjibaou Cultural Centre, issued on 7.5.2018.

Posted by Branislav Ignjatov at 22:29