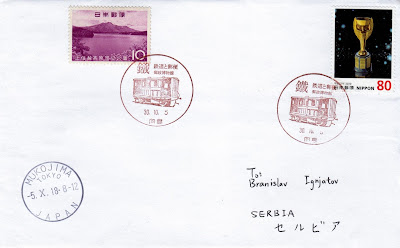 This is another cover from Japan, sent from Mukojima in Tokyo, on 5th October 2018, with two special cancellations dedicated to trains and regular postmark. It's interesting to see Japanese year on special cancellations, which is now in The Heisei period. The Heisei period started on , 11 of January 1989 after the death of the Emperor Hirohito, when his son, Akihito, acceded to the throne as the 125th Emperor. The Heisei period will likely end on 30 April 2019 (Heisei 31), the date on which Emperor Akihito is expected to abdicate the Chrysanthemum Throne. On regular postmark you can see regular solar year date 2018.

Posted by Branislav Ignjatov at 01:02