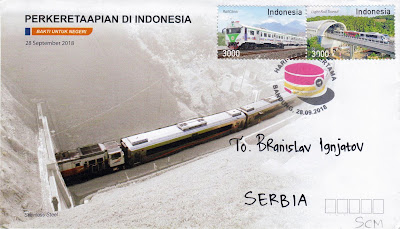 On 28th September 2018, Indonesian Post issued stamps and First Day Cover dedicated do Indonesian Railways. On first stamp you can see rail clinic and on second is light rail transit, and these stamps are cancelled with superb tricolored postmark, which represents conductor hat!
The majority of Indonesia's railways are on Java, used for both passenger and freight transport. There are three noncontinuous railway networks in Sumatra (Aceh and North Sumatra; West Sumatra; South Sumatra and Lampung) with two new networks is being developed in Kalimantan and Sulawesi. Indonesia has finalized its plan for a national railway network recently. According to the plan, 3,200 km of train tracks that will criss-cross the islands of Sumatra, Java, Kalimantan, and Sulawesi, it has been touted as the most extensive railway project in Indonesia since its independence from the Dutch in 1945.

Posted by Branislav Ignjatov at 21:39