The Big Five series on cover from Tanzania 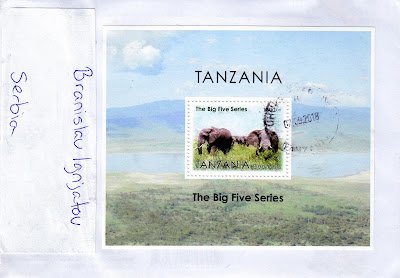 I received wonderful cover from Tanzania with minisheet The Big Five series, issued on 30.7.2013. They issued five stamps on minisheets, and this one is with African bush elephants. The Big Five is name in Africa, for five big animals: the lion, leopard, rhinoceros, elephant, and Cape buffalo. The term was coined by big-game hunters, and refers to the five most difficult animals in Africa to hunt on foot, but is now also widely used by safari tour operators. Africa's Big Five have become major concerns for wildlife conservationists in recent years. The African lion, African leopard and African bush elephant are all classified as vulnerable. The southern white rhinoceros is classified as near threatened while the black rhinoceros is classified as critically endangered, so hunting them is greatly restricted for the latter.

Thank you very much Henrik!

Posted by Branislav Ignjatov at 13:10